The Exhilaration and Fear of Changing PhD Topics 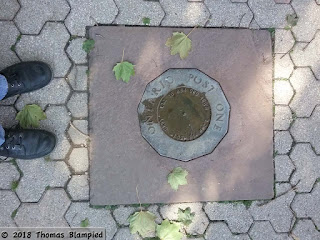 This is Post One (and my feet). If you visit the Ontario Legislature in Queen’s Park and walk around to the east side of the building, you will find Post One and a commemorative plaque explaining its significance. Unveiled as part of centennial celebrations in 1967, it is the symbolic first survey post in Ontario and a very fitting place to begin this reflection on the decision to change PhD research topics. A symbolic first post would be special enough, but it is actually related to my historical interests as well.

Choosing to embark on doctoral study is a decision that should not be taken lightly. After all, it begins with the hurdle of actually being accepted into a program, but then comes years of hard work, little money and introspective malaise. Nevertheless, this was a decision I began making in 2016 and ultimately found myself beginning my PhD study in the history department at the University of Toronto in the fall of 2017. I had received my MA from U of T two years earlier, but my interests had changed and so had my proposed project. On paper and in spirit I was embarking on a study of American plastic toys from the 1960s. Everything was going well as I readjusted to academic life: I had an excellent supervisor, excellent seminars to attend and friendly colleagues to work with. As the year progressed, all seemed well, even if I couldn’t really pin down exactly what my project would be or what I would actually study (I mean, how do you study toys from 60 years ago? Material culture analysis, advertising, participant observation?). I completed my first year and buried myself in books to learn the canon of American history along with petroculture (after all, plastic toys come from oil). After two months of reading, things began to get very real and I realized that this was not going to work. Something had to give.

It is easy when surrounded by academics to assume that everyone has a whole arsenal of degrees on their resume, but that simply isn’t the case. Even in Canada, a country with an exceptionally high rate of post-secondary education, only 24% of working-age adults have completed a university degree. Less than 8% have a graduate degree. It really is a very small group. Statistics like this show the privilege of graduate study – the chance to study a topic you love on somebody else’s dime. When you put it like that, it becomes real very quickly and the quest for meaning becomes acute. It is a gift to study, and I wanted to make it count.

American toys just didn’t do it for me. But what did? Anyone who has looked at my previous writing would see that I have a lifelong fascination with railways, but that I have struggled to reconcile it with academic work. My MA looked at model trains, but I couldn’t see the project getting bigger (thus my shift to toys). However, railways had been slowly creeping into my work through an unlikely avenue: treaties.

As part of my coursework, I took Prof. Heidi Bohaker’s Canada By Treaty, which examined the history of treaty-making between Indigenous groups and the Canadian government. I took it because I thought that it was important for a Canadian to know about the Indigenous issues that continue to be important today. Quickly, I realized that Treaty 9, signed in 1905-06 with additions in 1929-30, covered much of the land I had studied for my book on Ontario Northland. Even more interesting, the railway’s development coincided perfectly with the treaty. Coincidence? I think not. This turned into a paper, which became a conference paper, which became an article draft. Stuck facing an American future I didn’t want, the choice was clear: I was working on railways and Treaty 9 when I should have been looking at toys. On paper, I was studying toys. In spirit, I was studying treaties and railways. Most importantly, this meant something. The implications of Treaty 9 continue to affect thousands of lives every day. Transportation in Northern Ontario is a pressing issue. Perhaps most urgent, the Ring of Fire mining development in the region echoes the situation that led to the signing of Treaty 9 over a century ago.

The process of deciding to change topics took many weeks, but the final decision took only a matter of hours. The hardest part was breaking the news to my supervisor who, as a good supervisor should, was compassionate, understanding and excited that I had found a motivation to sustain my study. Within an hour, (sort-of) ceremonial handover complete, I was studying Canadian and Indigenous history. Yes, it was a nerve-wracking experience, but the relief more than made up for the trepidation.

How will this story end? I don’t know, but I am academically driven in a way that I haven’t been for quite some time. Remember Post One? It’s a symbol of government dominion over the land. So is the railway and I intend to explore what that means. If this story has a moral, it’s that doctoral study is an incredible privilege. For me, this privilege comes with the obligation to produce meaningful work in the hopes of making Canada a better place. I don’t know if my work will do this, but I have to try.

Posted by Thomas Blampied at 10:16 am