Apart from rail photography, I also publish books of railway photographs and railway history.  My books are available through Blurb online and through the retailers listed below.


2014
Call of the Northland: Riding the train that nearly toppled a government 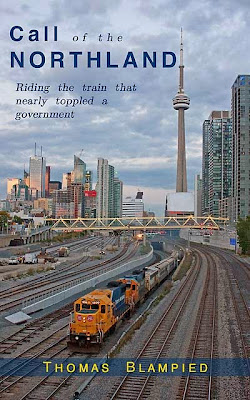 An up-to-date account of the railway’s history, the Ontario government’s failed attempt to divest the Ontario Northland Transportation Commission and its effect on the people of Northern Ontario.

From the back cover:

"For 110 years, the Ontario Northland Transportation Commission was the lifeline of northeastern Ontario. But on March 23, 2012, the Ontario Government announced that the Commission and its assets were to be split up and sold. The last chance to ride the train had come.

Join author and historian Thomas Blampied as he travels from Toronto to Cochrane on board the fabled Northlander. Meet the people – and the train – who have call this untamed region of Canada home since 1902.

This insightful journey is accompanied by an extensive history, an in-depth look at how the train created the northern Ontario we know today and a detailed examination of the tangled web of political manoeuvering and secrecy triggered by the announcement of the sale. Can the train survive in an increasingly Toronto-centric Ontario?"

2012
Rails of the GTA Volume 2: Further Railway Photographs from the Lens of Thomas Blampied

This book is now out of print.

This book picks up where Rails of the GTA left off and offers new and exciting photographs from the GTA's railways.

Rails of the GTA - Volume 2 brings the story of railways in the Toronto area right up to date with a collection of over 40 new images.  The resurgence in Canadian railways is clearly seen as this book examines day-to-day freight and passenger operations as well as some of the more unusual sights in the diverse world of the GTA's railways.

This book is also available from the Credit Valley Railway Co., Mississauga, ON. Website

This book is now available from the Toronto Railway Museum (autographed!). Website

2010
Stand Clear of the Doors: Whitby's Railway History from the First Tramway to GO

Discover the history of railways in the town of Whitby, ON.  It is a story of murder, royalty, decline and impressive growth.

In 1833, a tramway was built in a small town to the east of Toronto. This was only the first of a series of railways built through Whitby over the next 150 years. Stand Clear of the Doors tells the story of these railways, how they affected Whitby and how railway mania turned to decline and finally to growth once more. This history, complete with archival and contemporary photography of Whitby’s railway scene, is essential reading for any local history or railway enthusiast.

This book is also available from:


2009
Rails of the GTA: Railway Photographs from the Lens of Thomas Blampied

This book is now out of print.

A collection of railway photographs offering an introduction to the railways in and around the Greater Toronto Area.

The world is seeing a resurgence in rail transport and the Greater Toronto Area is beginning to follow the trend. For the first time in decades, rail in Canada is seeing a revival in both passenger numbers and freight haulage. Thomas Blampied explores passenger rail, freight traffic, yards, maintenance and the out of the ordinary in and around Toronto railways through over 80 photographs from the past decade.

This book is also available from the Credit Valley Railway Co., Mississauga, ON. Website

This book is now available from the Toronto Railway Museum (autographed!). Website

This book was reviewed by the Toronto Railway Historical Association - click here!

I am an historian by training (PhD, University of Toronto, 2022). My doctoral work specialized in the history of railway development in Northern Ontario, with particular interest in the Ontario Northland Railway and its relationship with Indigenous communities around James Bay.
I have completed research projects focusing on the history of Jewish fundraising in Toronto; tourism during the construction of the Panama Canal; and an MA research project on the connections between model railways, identity and memory.