The internet is tangential.  The curious mind is tangential.  Put the two together and the outcome can be surprising.  This is how a browse of UK thesis titles became the discovery of a century-old map of Whitby, Ontario.

Before entering my present phase of ONR-obsession (ie. my current book and the ONTC divestment process as a whole), my writing and photography centred on the Toronto area and, more specifically, Whitby.  Whitby formed the basis of my second book, Stand Clear of the Doors, which I hope to update in future as new information comes to light.  As such, I am always looking for interesting tidbits that might further outline the story of Whitby's railways.

My thought process from UK theses to Whitby maps went a little like this: 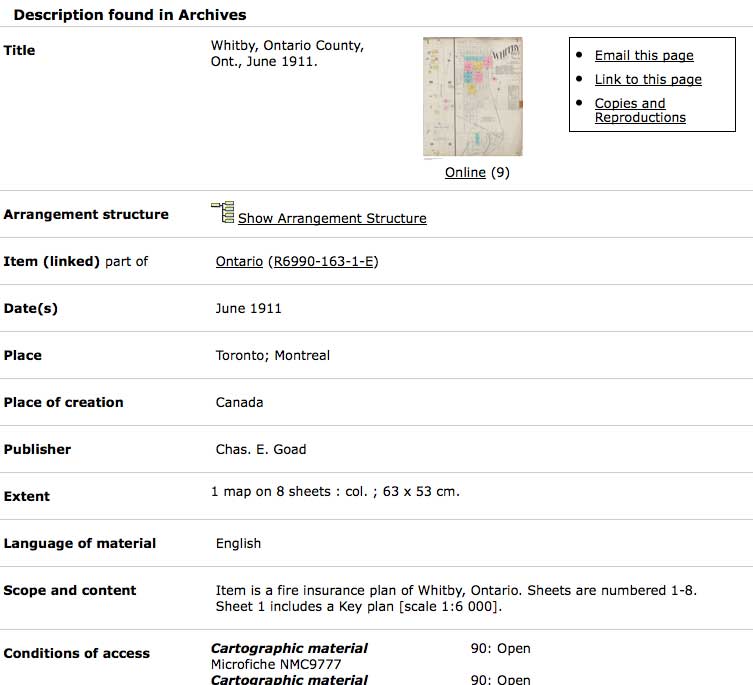 Record number 3844664 is a set of fire insurance plans for Whitby dating from 1911.  These plans are invaluable evidence for historians and archaeologists alike.  Not only do they outline what, and who, was around in 1911, but they also provide a clear outline of where buildings were.  Since the street plan of downtown Whitby has changed very little, these maps give the best outline of the route the Whitby, Port Perry & Lindsay Railway took through town.  The maps are available as high-quality images to browse at your leisure.  Another piece of the Whitby railway history puzzle falls into place.

P.S. I checked to see if such maps exist for Cochrane.  According to Library and Archives Canada's search facilities, they don't.  Of course, through the 1910s Cochrane was burned to the ground on multiple occasions, which probably doesn't help either.
Posted by Thomas Blampied at 7:10 am